The manor house was built in the 19th century. at the beginning. 1840 the manor was acquired by Juozas Paulavičius. Later, the manor passed to his son Edvard Paulavičius, the former director of the Kalisz (southwestern Poland) gymnasium. In gratitude for their sincere work, the founders of the gymnasium presented a gymnasium library to him, which became the beginning of public libraries in the Venta region.

Since 2016 the wooden manor house was resurrected. Younger visitors to the manor have a great opportunity to get up close and personal with the unusual Scottish Highland breed, cows and other animals raised at the manor. 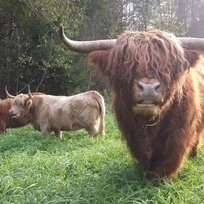