Renavas manor and the park surrounding it are located in Renavas village, Seda eldership, Mažeikiai district. It is one of the most interesting and best-preserved manor ensembles in Samogitia.

Written sources mention the Renavas manor as early as the 16th century. The manor house was then wooden with a thatched roof. It is speculated that a small brick building was supposed to have stood here in the late 18th or 19th century. at the beginning. Earlier, this manor was called Gaur, and later, when the 17th century. At the end of the 19th century, the Renne family became its owners, and the manor gradually gained the name Renavo.

19th century In the first half of the 19th century, the manor of Renavas was ruled by Antanas Renė, who was widely known for his hobbies in gardening. After his death, the manor passed to Eugenijus Rönne and later to Count F. Mielžinskis, who established a new park of about 6 ha in a beautiful place near the Varduva stream. About 1880 at the top of the slope the already mentioned modest but rather ornate palace was rebuilt. They were famous for their valuable collections of paintings and antiques. It is known that Mielžinskiai was very proud of the ancient porcelain products made in European cities. During the Soviet era (1980), the manor house began to be restored. The authentic environment of the manor-era library has been preserved in the palace. It contained more than 1,000 volumes of books (mostly beautifully bound, published in German and Latin). The newer library of the palace was mainly from the 19th century. second-half publications, mostly in Latin.

Since 2012 in the restored 19th century. There is a museum exposition in the homestead of Renavas manor (branch of Mažeikiai museum), which acquaints visitors with the culture of Lithuanian manors. 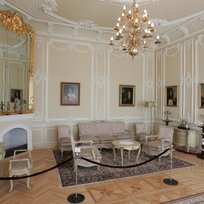