Church of the Crucified Jesus in Pievėnai

Pievėnai Church of the Crucified Jesus, which was built in 1788. built by landowner Feliksas Važinskis, resembles a traditional residential house in its form; of rectangular plan, with a tower, three altars. The only custom in Europe that has survived here is the theatrical Easter stand-by during St. Easter. The "Jews" put on various, as ugly as possible, masks, dressed in various scarves, with whips, found something outside, and drove to church, saying "screaming" in Jewish. The main goal of the "Jews" is to kidnap the cross. "Soldiers" do not allow intrusive "Jews" with swords, and "clashes" often take place between them. 1926 The Bishop of Telšiai treated such an appearance of the Easter disguises as an expression of disrespect for the majestic seriousness of the resurrection of Christ. Although such a performance was forbidden, it has survived in Pievėnai Church to this day. 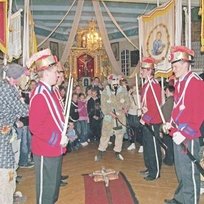